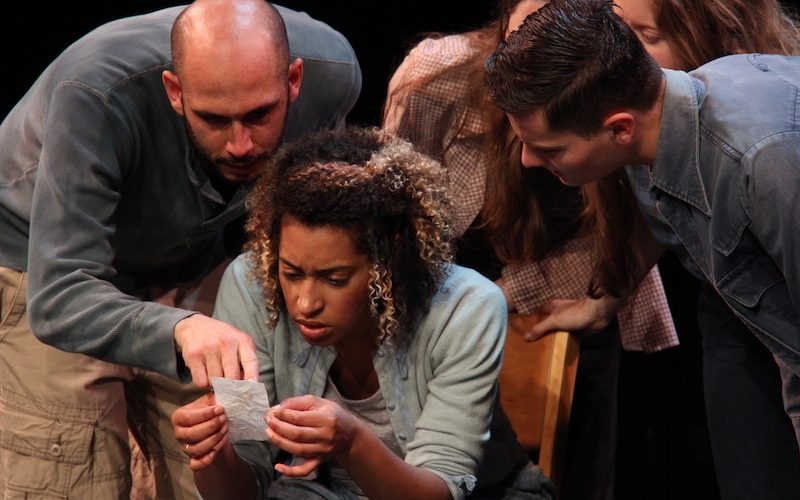 SAN FRANCISO, CA—A.C.T. Costume Shop’s Community Space-Sharing Initiative Program will host the first public production of Erin Bregman’s That it all Makes Perfect from Thursday, March 30th though Saturday, April 1st.  Focusing on life’s simple and often overlooked moments, the play follows a single soul as she “moves from her first breath to her last, while trying to hold onto the beauty and power of life’s seemingly mundane and easily forgotten daily mementos.” Co-directed by Susannah Martin and Michelle Talgarow and produced by Maddie Gaw and 6NewPlays, this beautiful theatrical production will feature new music by San Francisco composer Matt Boehler (SFMC ’17) and includes a live chamber ensemble.

Theater critic Alan Katz has praised the playwright for avoiding “gift-wrapping morals for ready consumption.” Like all of Bregman’s work, That it all Makes Perfect forces the audience to draw their own conclusions and to stay active participants as they glean meaning from the diverse and intricate elements of the production. The result is a highly profound night of theater, despite the seemingly commonplace and routine nature of the “daily moments” conjured by the players in this unique play.

The central question contemplated by the playwright–and the “soul” attempting to discover the best way to be human, can be put simply:  “Without memory, what remains of your life after you’ve lived it?”

When seen from the perspective of a “pre-incarnated” soul, such trivialities as folding a sheet, tying one’s shoes, or even counting coins come into touching focus.  Our human capacity to recall moments–big and small, pleasantly satisfying or epically catastrophic, give this play a universality and resonance far beyond the words uttered on stage.

Amy Mueller, artistic director of Playwrights Foundation, where Bregman launched her professional career as a member of their Resident Playwrights Program, has described Bregman’s plays as “unique, highly crafted, jewel-like pieces” which “use musical concepts to shape and score a theatrical journey.” This nuanced technique creates an atmosphere that is bold yet surprisingly soothing, as if the playwright had captured the very essence of daily life.

Composer Matt Boehler describes his score as more like a set of general instructions rather than “capital-M music.”

“Since breath and the act of breathing are essential motives in Erin’s play and many of the instruments depend upon the human breath for their operation…one can’t help but find the musicality in Erin’s work.”

He adds that in many ways “the play is an invitation to pick up your instrument and play along.”  Bregman was thrilled to collaborate with Boehler, who she admires for his spontaneity and sense of artistic adventure.

The essential question of the play is this:  What would it be like if you got to choose the life you would be born into?   The playwright sets much of the early action in a vague type of hiring hall where souls receive briefings on potential lives in which to incarnate.  The idea came to her while serendipitously spending time with a graduate from the California Maritime Academy in Vallejo. His descriptions of the ins and outs of showing up daily to the local union hall in anticipation of his next position caught Bregman’s attention.

“I was fascinated by the details of how the union hall worked, what the rules of assignment were, and how they might relate to a soul in search of a life to occupy.”  She decided to set the beginning of the show in a union hall, and, according to Bregman, “it took off from there.”

Fortuitously for audiences, the result is a totally fresh approach to theater-making.

That it all Makes Perfect is the first 6NewPlays production to be presented at A.C.T. through their Community Space-Sharing Initiative program.Honored by generous support from numerous grants including the Venturous Theater Fund, Zellerbach, CA$H, and Puffin West prizes, 6NewPlays is a group of local playwrights devoted to producing theater that is inventive, accessible, and affordable. The group has already produced plays number 1 (Chris Chen’s Home Invasion) and number 2 (Andrea Hart’s dark is a different beast).  Three future productions include works by Eugenie Chan, Barry Eitel, and Brian Thorstenson.

Matt Boehler is currently completing his M.M. in Composition at the SF Conservatory of Music. He has been commissioned by the Left Coast Chamber Ensemble, and his song cycle, Foursquare Cathedral, was recently declared winner of the 2017 Art Song Composition Competition of the National Association of Teachers of Singing. In addition to composing, he is a critically acclaimed opera and concert singer. He trained at Juilliard and has performed as a soloist in some of classical music’s most prestigious venues such as The Metropolitan Opera, Théâtre Royal de la Monnaie, and Canadian Opera Company.